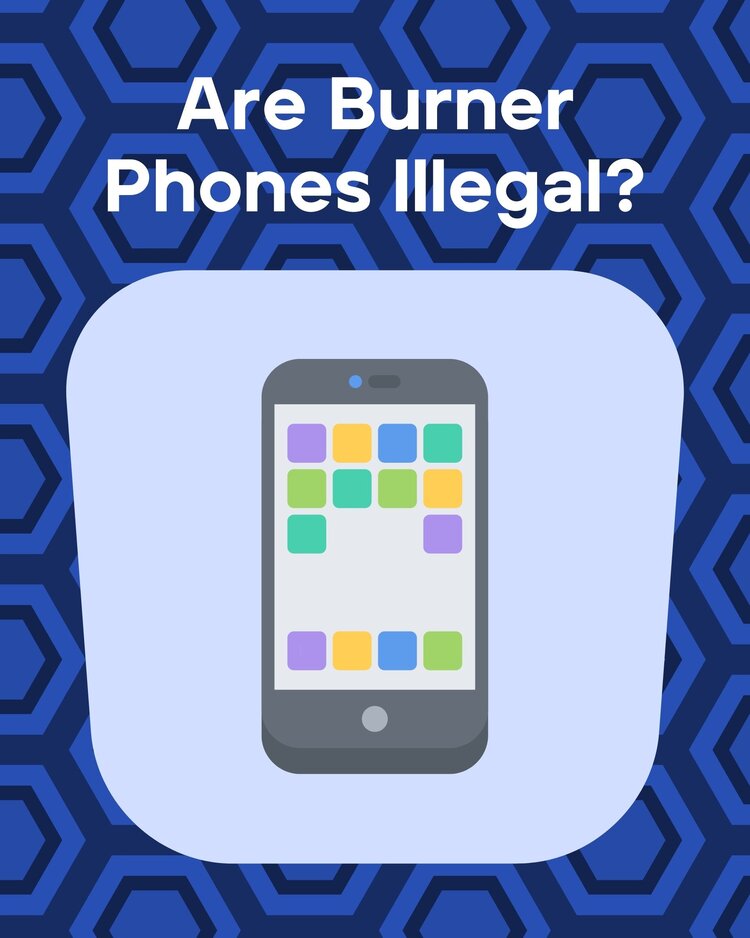 If you’ve ever watched Breaking Bad, Mission Impossible, or any type of modern crime movie then you’ve likely heard of Burner phones (the capital B stands for the Burner app, which we’ll explain in a bit). These types of phones are often prepaid or “throwaway” phones that require little paperwork to acquire and leave few, if any, paper trails back to the user.

While it might sound shady, there’s actually nothing shady about protecting your privacy, regardless of your reason why. On top of the ability to control who you share your private information with, there are also other added benefits, such as reduced costs, more in-app integrations, and fewer contractual agreements. But, are Burner phones illegal?

A brief history of Burner phones

Burner phones got their name due to the nature in which people used these types of prepaid mobile phones. The idea was that you would find a cheap prepaid mobile phone (i.e. no contract needed to open the line, which means no tracing the calls back to you directly), use it for a short period of time and then “burn” it (which is just a cool way of saying “get rid of” the phone).

So, when did all of these prepaid phones start hitting the market? In the late 1990s. Mobile phone operators and service companies wanted to extend their market reach. Previously, only those with good credit or a good financial standing could sign a contract for a mobile phone. This excluded a large portion of the population, including minors under the age of 18, from accessing cell services. The solution was to offer prepaid mobile phones that came loaded with minutes ready to use/

While most companies still required (and to this day still require) you to provide some sort of identification in order to purchase the phone, prepaid phones were much harder to track, especially if you paid in cash when purchasing and gave a fake name upon checkout (not that we recommend that).

What do people use Burner phones for nowadays?

Before the rise of smartphones and social apps, a regular Burner phone was a prepaid cell phone that you could purchase at a random corner store. And, as you can imagine given the nature of the phone itself, the features and functions were quite limited. “Call this number from a payphone” was about the extent of what you used a Burner phone for.

Now, with the Burner app, you’re able to use a Burner phone for more than just clandestine calls. The Burner Connections features, for example, are a cluster of features that were launched in an effort to help you keep your number private while you use your Burner number for work or freelance jobs. Now, you’re able to connect your Burner number to third-party applications such as Slack, Google Sheets, Dropbox, and even Evernote.

What’s the point? It’s all about work-life balance and increased privacy. With a Burner phone, you’re able to give coworkers, freelance contacts, and even your boss your Burner number, allowing you to reserve your private number for more personal matters. At the end of the workday, shut off your Burner number and enjoy the peace and quiet of using your private, protected number without calls and messages coming in every hour.

So, are Burner phones illegal?

No! Burner phones aren’t illegal. In fact, they offer an added layer of safety between you and those looking to perform illegal activities, such as hack your phone, access your contacts, or use your number to lookup private information about you.
However, depending on where you go in the world, you might find that different governments require different types of documentation when purchasing a prepaid phone or opening a new phone line. In Australia, for example, you’re required to show proof of your name, birth date, and home address when purchasing a prepaid phone. This means showing your ID card, credit card, or even your birth certificate.

The process looks somewhat similar in the US and other parts of North America and Europe, which means that modern-day Burner phones aren’t really, truly untraceable unless you have the Burner app.

Burner never shows your real number when you place a call or text someone. You could live in the 214 area code but make calls with a 917 area code number and nobody would know that you’re not physically in New York City. And, whenever you place a call, it’ll show up on someone else’s phone bill as a call from your Burner number, nothing else. It’s totally legal and totally safe.

Want to try out a Burner phone number before making a commitment to keep it? Click here to get your free phone number for seven days.