Can A Burner Phone Be Traced? 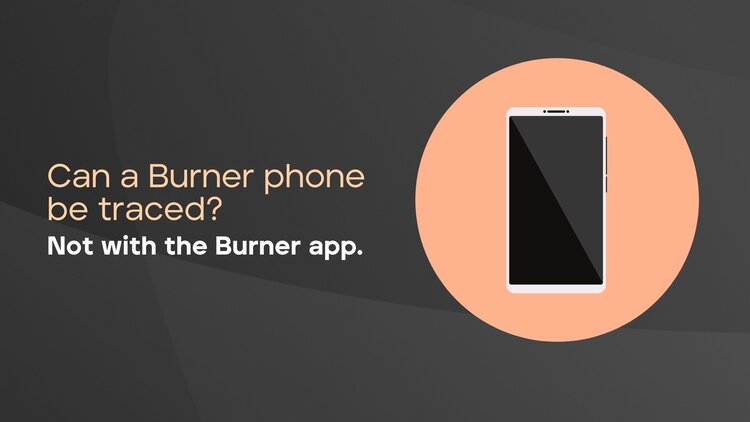 The most recent polls show that 70% of Americans believe that the government uses surveillance data for purposes beyond anti-terror efforts. It’s clear that it’s becoming increasingly more difficult to remain anonymous in our digital world, but what about if you just want to hide a phone call or two on your phone bill?

Can a Burner phone be traced?

The whole idea of burner phones back when they were actual throwaway phones was that they couldn’t be traced back to the user. You’d buy a temporary phone, use a temporary phone number, and get rid of it when it no longer served you.

This same idea loosely applies to the way Burner works. Burner never shows your real number when you place a call or text someone. You could live in the 214 area code but make calls with a 917 area code number and nobody would know that you’re not physically in New York City.

Why can’t Burner be traced?

When you receive a call, Burner forwards calls from your burner numbers to your phone to stay anonymous. Whenever you place a call, it’ll show up on someone else’s phone bill as a call from your Burner number, nothing else.

So, you could call someone using your iPhone in Houston, and on someone else’s phone bill, all it will show is your Burner phone number, which could be from anywhere in the United States or Canada. The same applies to incoming calls; your phone bill will show that you’ve received a call from your own Burner number.

What happens if someone finds out you’re using a temporary or Burner phone number? You just burn the number.

How to burn a Burner

Thanks to advancements in digital technology, you don’t have to burn your phone anymore to get rid of all traces of a number. Whew. That’s good news for that new Samsung Galaxy S20 you just bought.

If you’re using a second phone number through the Burner app, you can simply use the Burn button. While it sounds a lot cooler than it is, it’s a feature that’s extremely easy to use.

If someone’s found out about your Burner line or you simply don’t need it anymore, you can easily dispose of the number. The Burn feature allows you to burn any number at any time virtually.

At the bottom of the main Burner screen, you’ll see a flame icon. Click on that and then hold down on the “Delete” button until a message appears. You’ll have one last chance to change your mind before permanently deleting all data associated with that Burner number.

As the message says, once you burn that number, everything will be completely wiped. Everything.

After burning a number, there’s no way that anybody will be able to trace your burner phone. All data will be wiped, including messages, voicemails, and photos. You won’t be able to undo it once it’s done, so make sure you pull out everything you need before burning. Then, enjoy watching it burn (figuratively speaking, of course).

Listen, we’re not in the business of getting into your business. We’re simply here to provide you with easy ways to protect your privacy. So, when you ask us, “Can a burner phone be traced?” our answer is a hard no. At least not with us.

Whether you’re using a Burner phone number because you don’t want work contacts having direct access to your mainline or because you’re an international spy currently undercover and on the run, we’re here to help.

Getting a Burner number allows you to maintain the integrity of your identity while enjoying lots of other perks such as custom voicemail greetings, auto-reply text bots, and more.

Ready to go undercover? Create your second number today to enjoy being untraceable.