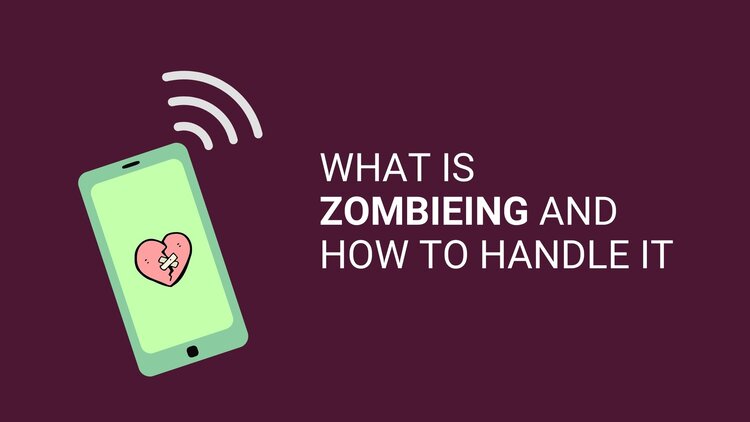 Modern dating is tough. If you thought you’d just gotten a hang of handling ghosting then we’re sorry to have to introduce you to the newest modern dating trend: zombieing.

As the name suggests, it’s when an old online dating match or an old flame arises from the dead. It’s the opposite of ghosting, basically, and it’s becoming increasingly more popular due to lockdowns and social distancing.

But, knowing what zombieing is and how to handle it when it happens are two different things. How do you get rid of a zombie in the real world (especially that really annoying one who only talked about themselves on the first date)? Here’s how.

When someone ghosts you, they’re essentially performing a vanishing act. You know, like a ghost. They disappear into the night with no warning or explanation. And, quite honestly, it can hurt. Sometimes there are good reasons for ghosting, and if you fancied the person, you might be happy when they pop back up as a zombie.

Zombieing is when someone rises from the digital dead. There are two types of zombies: those who were actual exes and those who were casual dates. Zombie exes are the old partners you bury deep into the proverbial ground. You delete old photos, erase messages, and clear your social media accounts of any trace of them ever existing. Then, as you’re getting over them, they reach their slimy hands straight out of the ground to take hold of you again.

Casual zombies are the people who likely ghosted you to begin with and then, a few weeks into quarantine or after another one of their failed relationships, they like a photo on your Instagram or send a funny GIF over text. Yep, they’re back from the dead and you’re wondering if it’s even worth it to engage in their pathetic (yet oh-so-irresistible) attempt of conversation via funny cat memes.

How to Handle Zombieing

How do you handle zombieing? The answer depends on how intense the relationship or “situationship” was in the first place. If you were in a committed relationship with the person, they truly might be contacting you out of the blue to check in on you or to talk about something serious.

If you matched with the person and exchanged a few texts and then they ghosted you, it’s best to try and resist the urge to engage. This is especially true if you were particularly upset by their ghosting and have finally gotten over it. Leave it where it should be, dead and in the ground.

Think about the relationship, however serious or casual it was, and think about what you’d gain by interacting with the zombie. If they’re willing to explain why they ghosted in the first place, it can be worth hearing them out. If they’re just popping back up because they’re bored in quarantine, don’t even give them a chance.

Setting Up a Second Phone Number for Zombieing & Ghosting

Okay, so let’s say that you’ve chosen not to interact with the person who’s zombieing you. What if they keep messaging you? It’s annoying, to say the least, and it makes it hard to ignore their efforts at casual contact. The solution? Always use a second phone number for dating in the first place.

Before you ever give someone the chance to ghost you or engage in zombieing, sign up for a Burner phone app that allows you to use a second phone number for online dating and other situations where you’d like to keep your personal matters private. Then, when it’s time to cut someone off for their online behavior, all you have to do is block or mute their number or simply get a new Burner line.

Get as many Burner phone numbers as you want or need and use each as a private line on your iPhone or Android phone. It solves the issue of zombieing and, in the case that you need to ghost someone who simply won’t leave you alone, it helps with that, too.

Arm yourself against the zombies and get your number today.