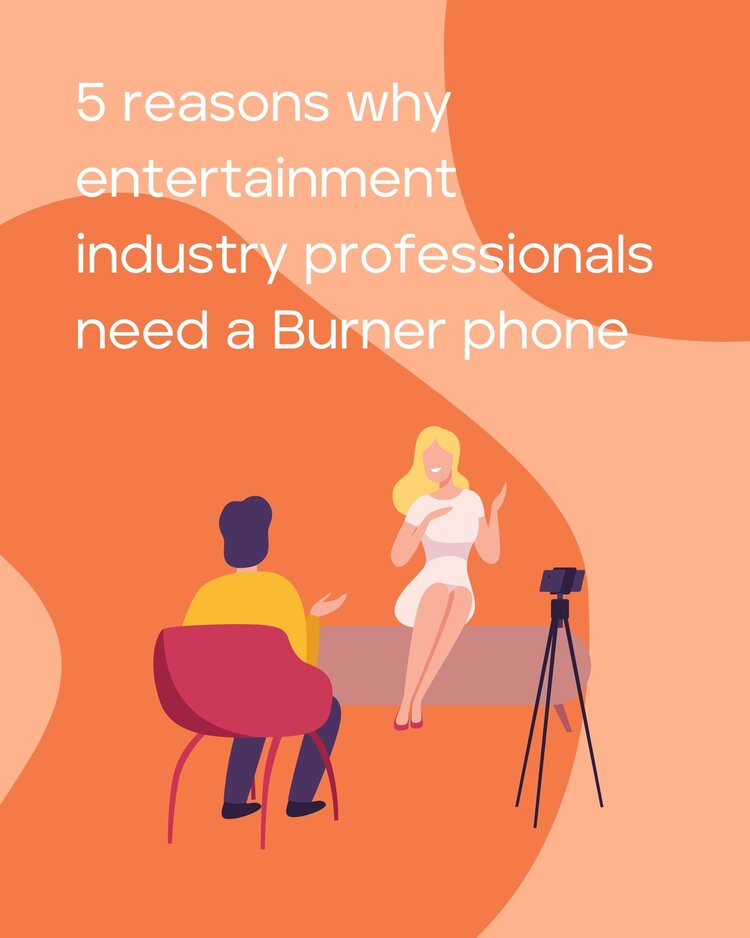 After coronavirus lockdowns forced the world inside, those in the entertainment industry were still feeling the burn. In March, the IATSE reported that the pandemic shutdown resulted in the loss of 120,000 jobs held by its 150,000 members.

Aside from the fact that any type of production crashed to a halt, why are workers in this industry finding it hard to bounce back? The same study revealed that 83% of them identify as freelancers, meaning that they weren’t protected by any formal contract that would help see them through these challenging times.

As the world begins to open back up slowly and the entertainment industry breaths back to life, professionals in film, television, and other industry areas are beginning to organize their lives and look for jobs.

In the entertainment industry? Here’s why you need a Burner phone

Playbill once published an article detailing the horror stories of famous Broadway actors during castings and callbacks. If you’re in the entertainment industry, you’ll likely understand just how brutal life can get when applying for roles or production positions.

If you’d rather not have random casting directors or anybody who is part of the casting process contact you, use a Burner phone for any entertainment industry-related tasks. This not only allows you to burn the number when you’re done with that specific casting, but it also allows you to color-coordinate your contacts and create different lines for different

Let’s face it, the entertainment industry isn’t an easy place to make a living. Whether you’re a musician, actor, comedian, producer, or budding screenwriter, the industry is a tough place to make it, leading many to turn to side hustles in order to supplement their income. In fact, Side Hustle Nation notes that even the rich and famous have side hustles to grow their wealth (so, no shame if you have one too)!

So that you’re able to fully separate your entertainment industry work from your side hustle work, use a Burner phone. Post your second phone number to Etsy, take sales calls, answer freelance client questions via text. You can do it all with Burner and know that your personal number is protected. You organize your working life and you keep your contacts separate. It’s a win-win.

We always suggest using a Burner phone when applying for jobs, especially if the jobs are short-term positions or one-off projects, which is the case most of the time in the entertainment industry. If you move from casting to casting or from one production to the next as a gaffer, you’ll likely want to keep those contacts separated from your personal contacts.

When applying for your next production position or comedy gig, use a Burner phone number so that, if things don’t go the way you planned, you can burn the number and move on. You don’t have to worry about receiving spam texts, random calls, or that your private number will fall into the hands of someone that doesn’t need it.

Hollywood assistants have long been treated and paid poorly and the pandemic has only exacerbated that problem. Recent reports revealed that assistants at certain studios were being asked to bill a maximum of 40-hour workweeks despite working far more hours. If this is you, it’s time for you to get a Burner phone.

With a Burner phone, you’re able to use your Burner number for all assistant duties. Then, when it’s time to shut off (which should be well before 10 pm, Hollywood elites), simply hit the Do Not Disturb button in the Burner app and enjoy using your regular phone to engage in other activities that spark joy, such as scrolling mindlessly on Instagram for hours.

You don’t actually need a set reason to want or use a Burner phone. Sometimes, it’s just nice to protect your privacy, especially if you’re working in the entertainment industry. As a unique little community that functions via contacts, it’s best to keep your personal information private sometimes (even if you’re not doing anything shady).

Ready to try it out? It’s free for seven days, so there’s no risk. Get your free number today and start to discover the benefits of a Burner phone.