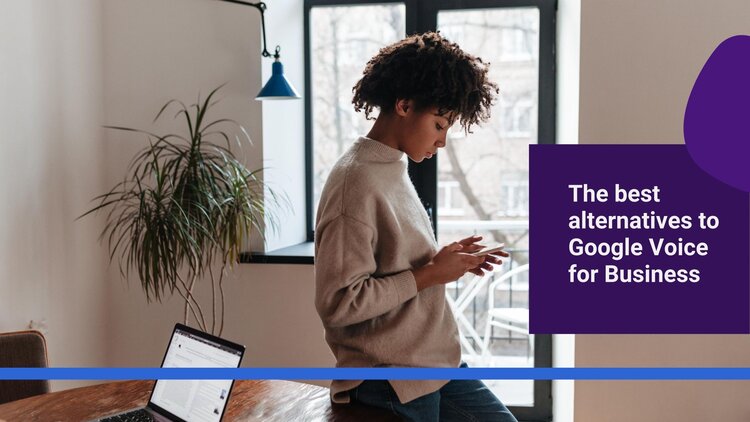 One recently released study showed that over half of American workers handle business on their personal phones. From responding to messages and making sales calls to dialing in for an important remote conference call, there are many different reasons for having to use your personal phone and phone number for work-related tasks.

You’ve probably heard of people using Google Voice for business, but it’s not the only option you have. Here’s what to know about the best alternative to Google Voice and why it’s even important in the first place.

First thing’s first...what the heck is VoIP? It stands for “voice over internet protocol” and it basically enables you to make and receive traditional phone calls as well as receive messages over the internet. Whatsapp, Google Hangouts, and Facebook Messenger are all popular VoIP apps that don’t require you to use your traditional phone carrier’s data to make or receive calls or messages.

Who uses VoIP? Lots of people and for lots of different reasons! It’s great for:

The Downfalls of Google Voice for Business

VoIP is a money-saving option for lots of businesses as they don’t come with any setup fees or other requirements aside from having a smartphone to work the app from. And, as mentioned, while numerous companies use Google Voice for business purposes, it’s got a few downfalls.

While these aren’t massive drawbacks, there are other solutions that are easier to use that work great for business tasks, online dating, freelancers, and even those looking to sell something online.

The best alternative to using Google Voice for business? Burner. It’s the original second phone number app for calling, texting, and picture messaging. And, it shines where Google Voice doesn’t.

Not only can you create a second phone number (and as many other lines as you need), but you can keep your Burner phone number as long as you have a subscription. Subscription lines auto-renew and are much more budget-friendly for individual employees and small businesses than installing an entirely separate work phone system.

If someone calls your Burner number, the call is routed through to your number like normal and you’ll be asked whether you wish to accept the call or not. If you don’t, they can leave a message that’ll go to your Burner voicemail, allowing you to keep Burner voicemails (in this case used for work) separate from other voicemails.

Along with allowing you to keep your work life separate from your personal life, you can even use Burner to send text messages and picture messages. The best part? They look like regular text messages; the recipient has no idea you’re using a Burner phone number.

Download the app today to get a free second phone number for a week just to try it out. Then, sign up for a Subscription Burner to run your professional life with ease.